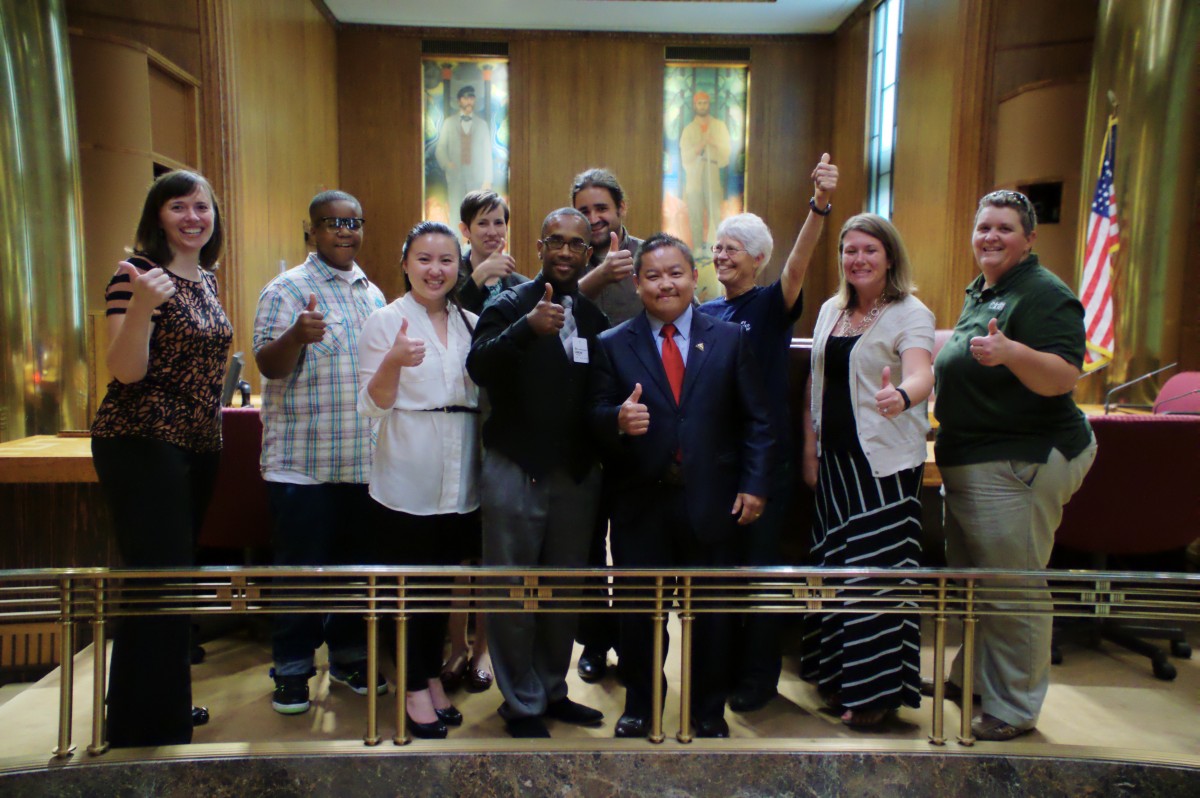 Program members, including director Damone Presley, celebrate an ordinance in Saint Paul that increases the price of cheap, flavored cigars.

The Ramsey Tobacco Coalition is celebrating a huge victory!  Saint Paul is now the largest city in the state to require cigars to be sold at a minimum price of $2.10 unless sold in a pack of five.  On August 27, the City Council voted unanimously in support of the ordinance, which will make these products less appealing and accessible to young people.

This work began more than a year ago when the Ramsey Tobacco Coalition conducted an assessment of cigars in the retail environment.  Cigars were being sold for as little as 50 cents.

Youth members of the group Vision in Living Life – Change is Possible saw that as a problem.  They recognized that low-priced cigars were yet another tobacco industry tactic meant to target them. These products were appealing and affordable to people their age.

“People my age or even younger than me can get ahold of these cigarillos for cheaper than some candy,” said Kenyan Green, a sophomore at Johnson High and Vision in Living Life member.

The Ramsey Tobacco Coalition identified many possible solutions and presented them to the youth, who decided that making these products more expensive was key to reducing cigar use among their peers. The Vision in Living Life youth and other coalition partners began educating Saint Paul residents and leaders. They spoke up for a healthier, safer community.  They found that many community members supported their efforts. The youth members met with each of the councilmembers to explain how the use of these cheap cigars impacts their neighborhoods and lives.

Their hard work paid off. The Saint Paul City Council showed its commitment to protecting the health and safety of its youth by enacting a strong tobacco prevention ordinance.

“I am proud of the members of my youth leadership group for speaking up for a healthier and safer community,” Damone Presley, program director for Vision in Living Life – Change is Possible, said.

The City Council voted unanimously to set a minimum price for single cigars at $2.10 each. All cigars in packages of less than five must be priced at $2.10 each. For example, a two-pack of cigars would cost $4.20, a three-pack would cost $6.30 and up to five. Increasing the price of tobacco is the single most effective way to prevent youth tobacco initiation. The ordinance, which puts an end to 50-cent cigars being sold in Saint Paul, will prevent many youth from starting a lifelong deadly addiction.

Council member Dai Thao, sponsor of the ordinance, said during the hearing on the ordinance that it is the council’s responsibility to create a healthy community.

“This issue is about the underlying problem of the tobacco companies’ intentional marketing to youth and communities of color,” Thao said.

Saint Paul has joined Brooklyn Center as only the second city in Minnesota to pass this strong youth tobacco prevention ordinance. It is the largest city in the state to do so and sets the tone for the rest of the state, said Alicia Leizinger, RTC program and policy specialist.

“Saint Paul has taken a strong stand against the tobacco industry’s relentless efforts to addict young people to their deadly products,” Leizinger said. “By raising the price of cheap cigars, they took an important step in breaking the cycle of addiction for the next generation. We consider this to be a big first step, but there is more to be done.

“We will work with the City of Saint Paul to inform vendors of the new law. We will continue to work with council member Thao and the rest of the council to find even more ways to help prevent youth tobacco addiction.”

Our partners were instrumental in advocating for this ordinance and ultimately, its passage.  We couldn’t do it without them!

Check out some highlights of the testimony of our advocates: