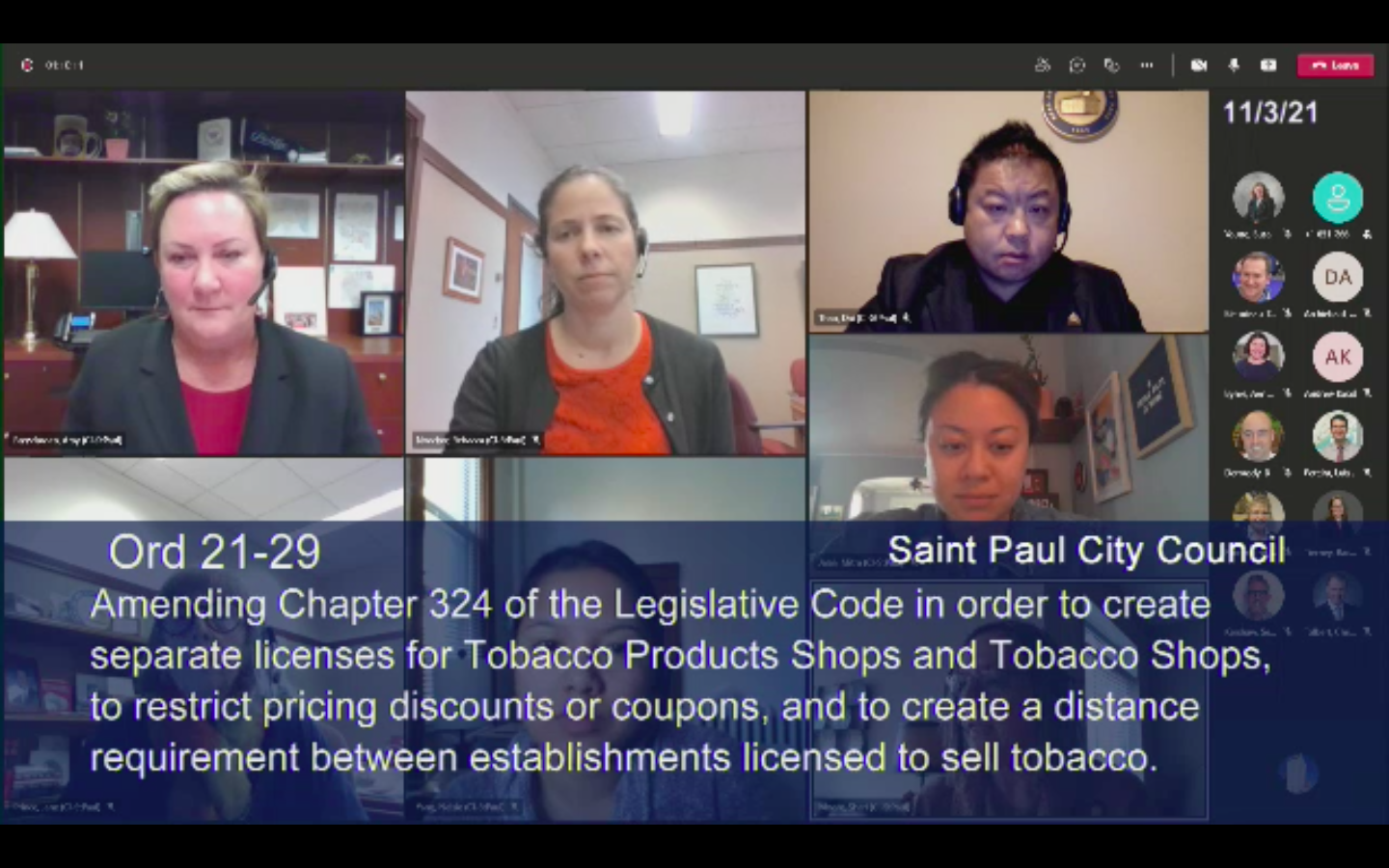 SAINT PAUL (11/4/21) – On Wednesday, November 3, the Saint Paul City Council voted unanimously to prohibit the use of coupons and price promotions for commercial tobacco and vaping products. The measure is part of a comprehensive commercial tobacco ordinance that also sets a $10 minimum price for cigarette packs and standard-size cans of smokeless tobacco and increases penalties for retailers who sell commercial tobacco to people under age 21.

Saint Paul has historically been a leader on tobacco control policy. They were one of the first cities to enact a smoke-free air ordinance, well ahead of the statewide law passed in 2007. Saint Paul was also among the first cities to restrict the sale of flavored tobacco, including menthol cigarettes in 2017. Since then, more than 20 Minnesota communities have followed suit.  Saint Paul continues its leadership on tobacco control policy with this ordinance. According to the Association for Nonsmokers – Minnesota, the inclusion of vaping products in the ordinance’s price-discounting prohibition makes it the first-of-its-kind in the United States.

Council President, Amy Brendmoen, stated in a virtual public hearing on October 26 that commercial tobacco adds no value to the community and retailers need to find more creative ways to attract customers.

Brendmoen and the other six Council Members all voted in support of the ordinance.

“It would be even more powerful to see other cities adopt this as well. So I encourage those elected officials to do this for their communities, too,” said Councilmember Nelsie Yang before the final vote.

During the virtual public hearing for the ordinance, the Saint Paul City Council heard from a broad and diverse group of supporters representing community organizations, healthcare groups, businesses, religious groups, and Saint Paul residents. One such supporter was Jonathan Rose, Saint Paul resident and Executive Director of the Sierra Leone Aid Initiative.

“Keeping the prices of all tobacco products high and regulating price promotions are progressive steps toward protecting our families and community from starting and helping with quitting,” said Rose.

“Cheap tobacco does not benefit my community’s health. Putting this in place will have a positive impact on the mental health of my friends and family,” said Zhara Christopher, a young St. Paul resident, during the virtual public hearing.