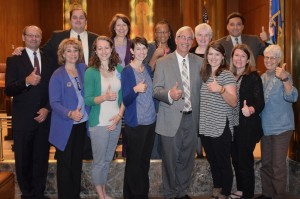 In 2005, Ramsey County showed leadership in passing one of the state’s first smoking bans for bars and restaurants. Two years later, the Minnesota legislature enacted the statewide Freedom to Breathe law, protecting all Minnesotans from the harms of secondhand smoke.

Ramsey County has taken a stand to ensure our residents, workers and visitors aren’t needlessly exposed to tobacco and e-cigarette use when they are in indoor public spaces, or simply entering and leaving buildings, said Jim McDonough, Chair of the Ramsey County Board of Commissioners. Hopefully, the state will follow suit and recognize the need to protect all Minnesotans from the harms of secondhand smoke and e-cigarette emissions.

The bottom line is if there is any uncertainty about the impact it has on health, we’re doing the right thing, Ortega said. It’s better to move in the direction we’re moving. We need to keep enhancing the health of our community.

Ramsey County joins nine other counties and 20 cities in Minnesota that have also prohibited the use of electronic cigarettes wherever conventional smoking is not allowed, according to Katie Engman, program director for Ramsey Tobacco Coalition. State law prohibits the use of e-cigarettes in places such as schools, state colleges and universities, government buildings, hospitals and clinics, but state legislators stopped short of enacting a comprehensive usage ban.

Kudos to Ramsey County leaders for protecting clean indoor air for all residents and visitors, Engman said. They’ve also gone one step further in protecting public health by not allowing conventional cigarettes or e-cigarettes within 25 feet of all building entrances. These actions show true public health leadership that should be commended.